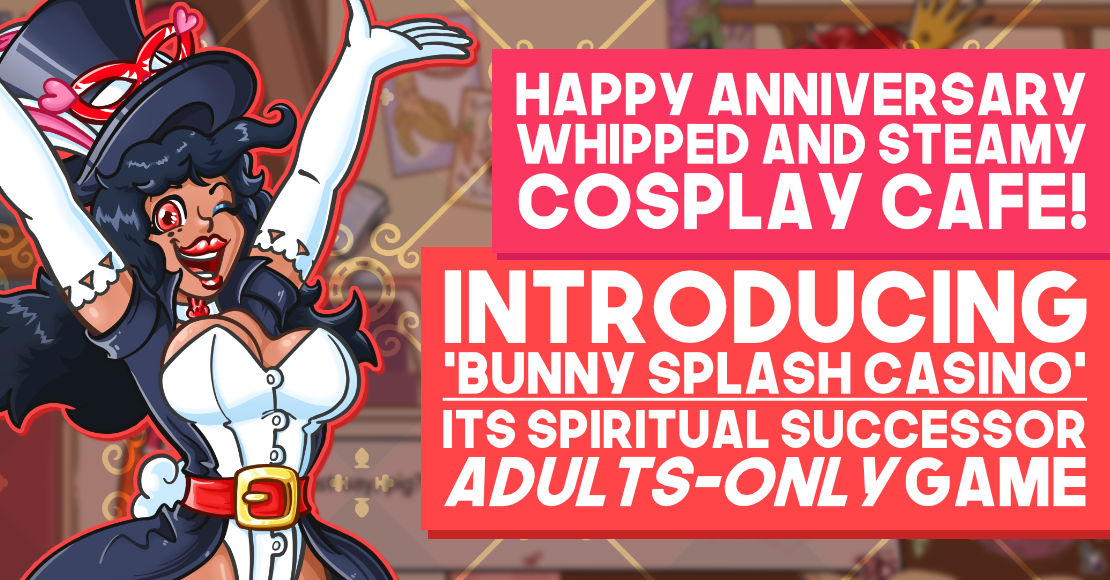 Whipped and Steamy • Cosplay Café is celebrating its first anniversary! One year ago we launched an adult game and it’s been a wild ride since. We're planning on updating it, but decided it’d be better to focus on a new game entirely.

We’re soft-announcing ‘Bunny Splash Casino’ and the ‘Bunny Copulation’, our new adults-only game and brand. You can start following its channels, here on Itch, on Twitter and Discord as we get started on the project!

Happy First Anniversary, Whipped and Steamy • Cosplay Café! One year ago, we decided to create a completely different game to those we had done before and took a jab at developing an adult-themed game during the one-month game jam of Strawberry Jam 3.

What resulted from the it was the game we originally called Cosplay Café, an adult-parody visual-novel mixed in with light-management elements. Set in a world where adult media is king, Cosplay Café gave us the liberty to try a whole new level of world characterization and character depth that we hadn’t tried before. Touching on topics normally regarded as taboo gave us a lot of room to explore themes that we felt we’re not often explored in video-games, and opened a lot of opportunities for original writing. 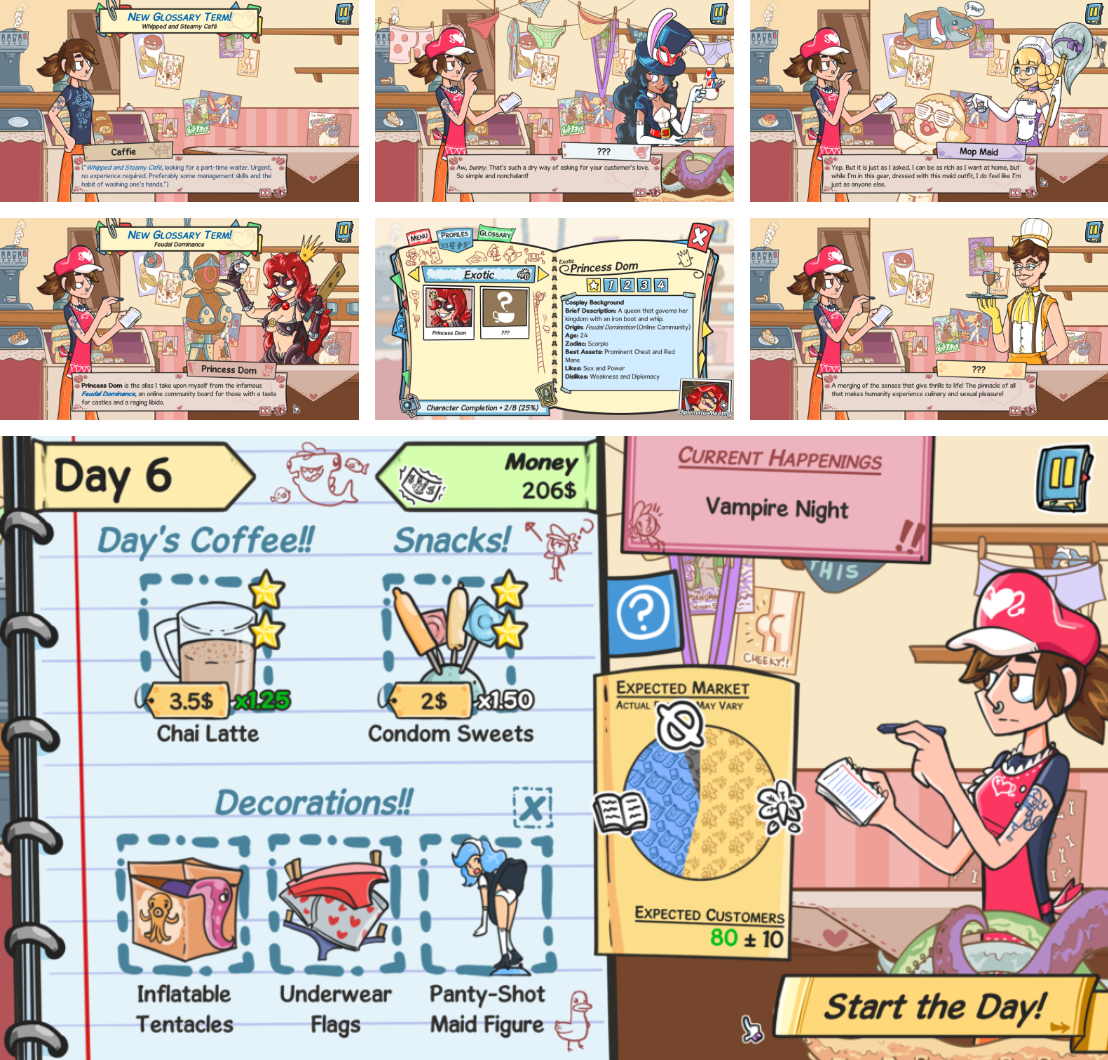 Ever since we’ve shipped the original version of Cosplay Café, things certainly have been a wild ride. We re-branded the game to its new name of Whipped And Steamy, won the Strawberry Jam across five different categories, got awards and selections for events, made a explicit-collaboration with another game and much more. It's flattering to see how many milestones Cosplay Café hit as a single-month project.

Not only that, but Whipped and Steamy and Cosplay Café have changed us as developers, as a brand and changed the way we look at the strengths and uniqueness of our games. Last year was a very big puzzle in-regards to ‘What’s next?’ but we believe we’ve finally found where we want to go with our projects.

But before we go further, we'd like to highlight the celebratory art we made for the game’s anniversary, of course! 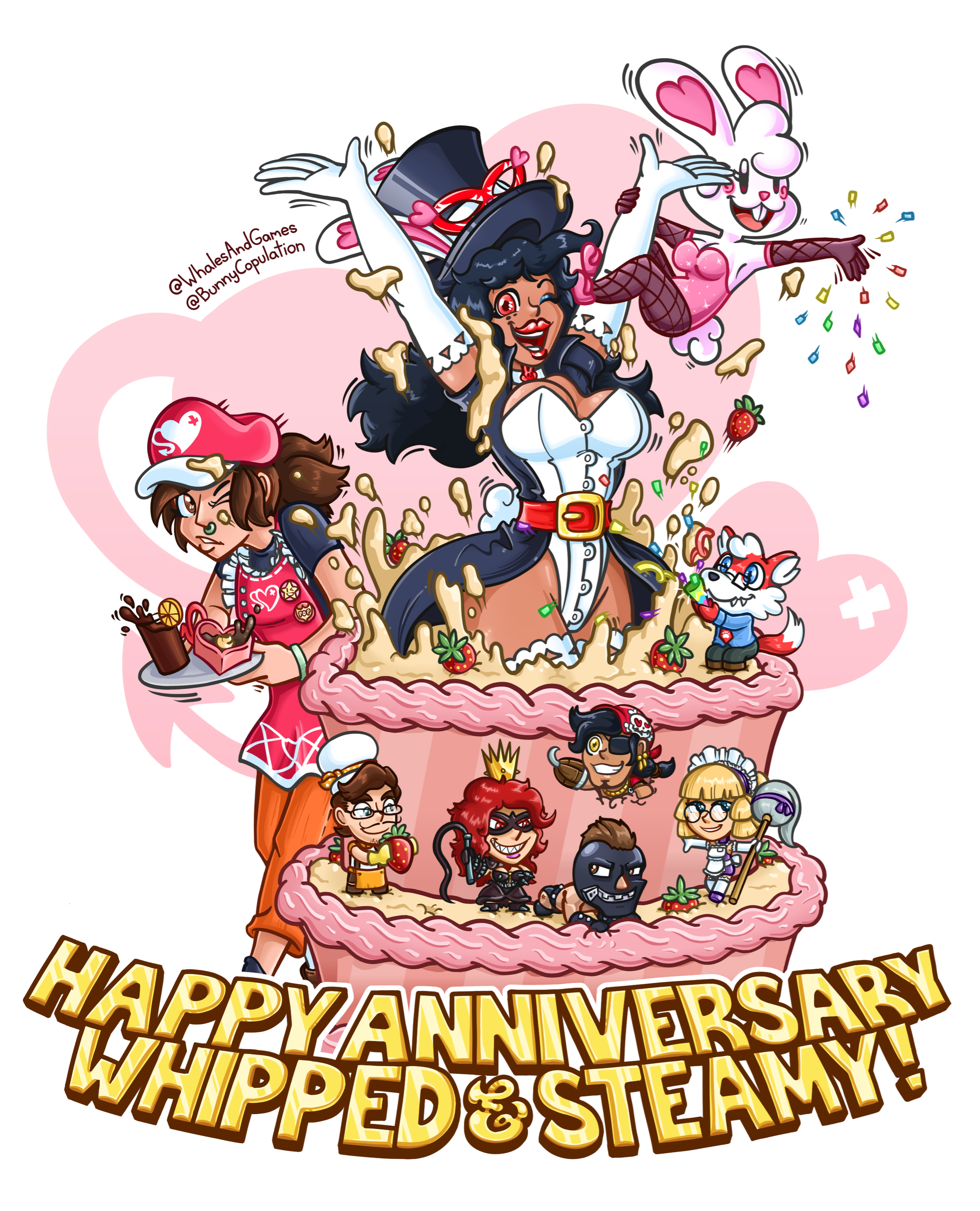 We’ve talked about back in our December Status Report about how we were originally planning on developing updates and expansions for Whipped and Steamy • Cosplay Café, but we unfortunately hit some personal road-blocks that led us to freeze development on the game.

During that frozen-development period, we started considering the future of the game and what we could do with its themes. Whipped And Steamy left us with a taste to explore the adult game genre even further, and we felt the management side of the game could see a complete remake from the ground up to feature even better gameplay.

Taking into account that realization and the different ideas we had for Cosplay Café expansions, as well as feedback we got from the ‘What would you like to see next?’ from the last report, we decided it’d be best to go from Cosplay Café into a completely new follow-up project.

As we started scrambling and putting ideas together, thinking about how we could keep some familiarity between Whipped And Steamy and this new game, we realized that we had already accidentally made the pitch of the game we wanted to make ourselves before. That idea was actually embedded within Cosplay Café all-along! 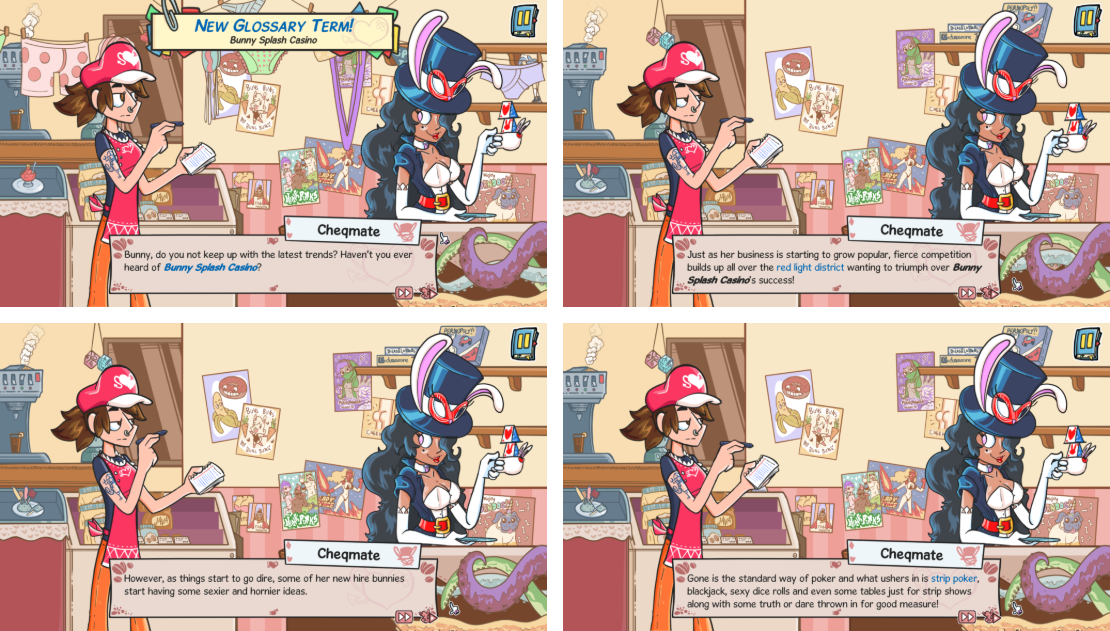 If you haven’t caught on yet based on the screenshots above and from all the build-up, we’d like to make the ‘soft-announcement’ that we’ve begun working on Bunny Splash Casino!

If you’ve gone through Cheqmate’s story in Whipped And Steamy, you already have some idea of what to expect, and sure enough, Cheqmate will be taking the lead as the main character of this new game. You can even notice her (and Buns Buns) new updated design for Bunny Splash Casino featured in the anniversary artwork! Likewise, given the previous familiarity talk, we also plan to have some other characters and ideas from Cosplay Café appear in Bunny Splash Casino some way or another. 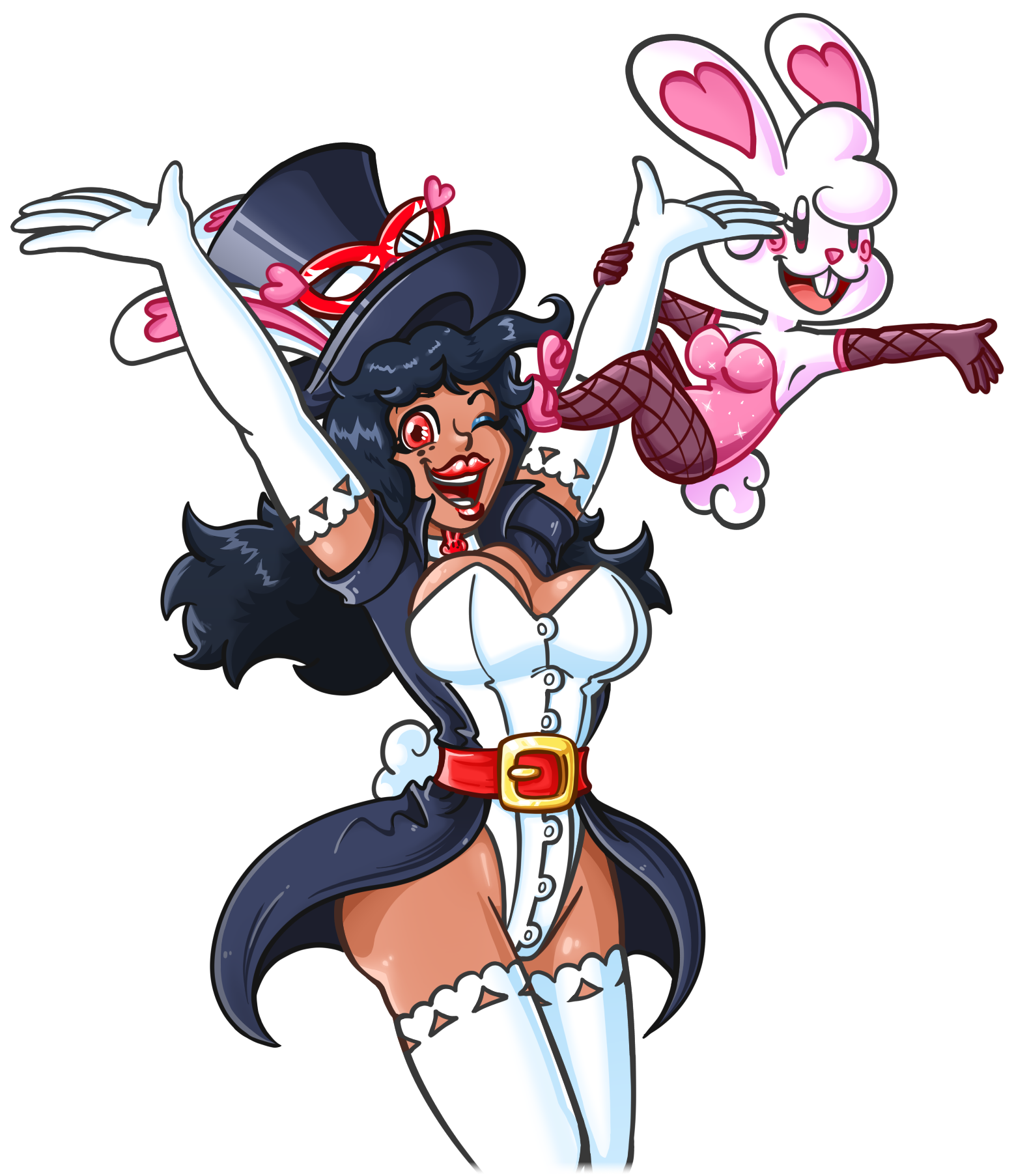 As teased in our Lunar New Year celebrations, this is the game we have planned to be our first commercial game, and we’d like to release it on storefronts (Steam, Itch, …) later down the road. When time is right, we’ll be talking about how we plan to manage demos, roadmap and more. Yet, at this moment, it's still too early to make any formal announcements.

Given how Bunny Splash Casino is going full hands-on with adult content, we thought it’d be best to subsidize it to it’s own sub-brand. This way, you know exactly what to expect when you look up either.

For that matter, we created Bunny Copulation, our (appropriately named) new brand that will focus exclusively on adult-only media like Bunny Splash Casino. It's still the same crew you know from Whales And Games but with new channels specifically marked for when nobody's around! 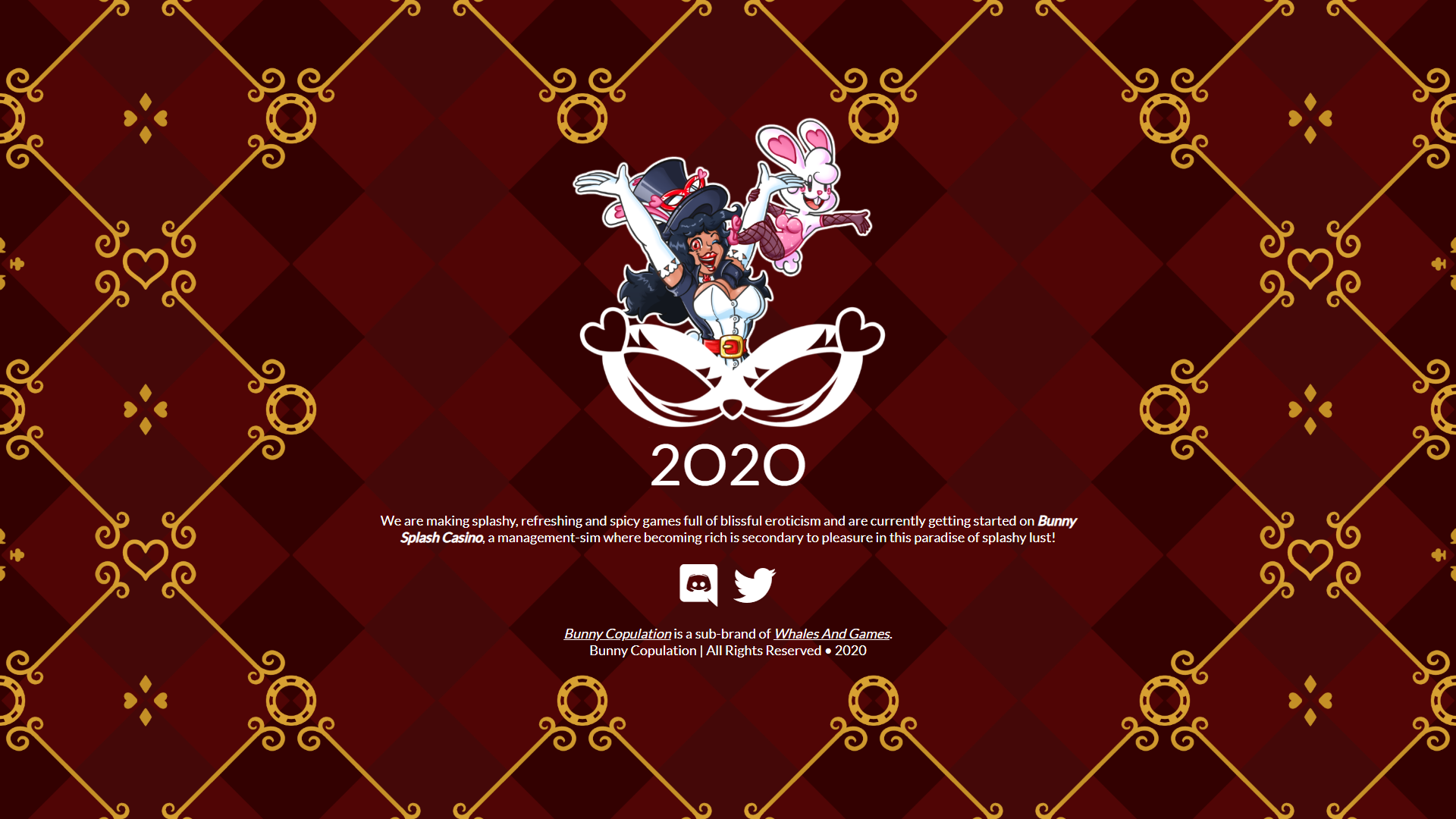 Despite this announcement, Bunny Splash Casino and the Bunny Copulation are still in their early days. This announcement is more of a ‘Yes, we’re working on something!’ than a full reveal, and we’ll showcase more of the game as it starts taking shape as we’re only now preparing to begin hands-on development.

What can we expect from Bunny Splash Casino?

The planned intention of the game is to create a solid and fun casino-hosting experience, which includes managing the activities and resources, and overseeing the everyday life of the locale. Pair customers to the right hosts and games, serve the correct foods, drinks and utilities to the right tables, and get prepared for everything patreons ask of you!

Similar to Whipped And Steamy • Cosplay Café, there’s going to be an emphasis of interesting characters to meet. And since opening a casino in the Red Light District is asking for competition, expect other businesses to take notice, challenging you to see who can serve better the patrons!

That’s all the overview that can be shared of it at the moment, but there’s already plenty of it planned. We’ll be sharing more about it when the opportunity presents itself keep your eyes out!

In case you’d still like very-very-early-access look into what we’re doing, you can follow us on our new dedicated Bunny Copulation, Itch, Twitter and Discord! Be wary of the ‘Adults Only!’ label on them though!

We have even more Questions & Answers about Bunny Splash Casino, Bunny Copulation and Whales And Games available at our website's version of this blogpost!