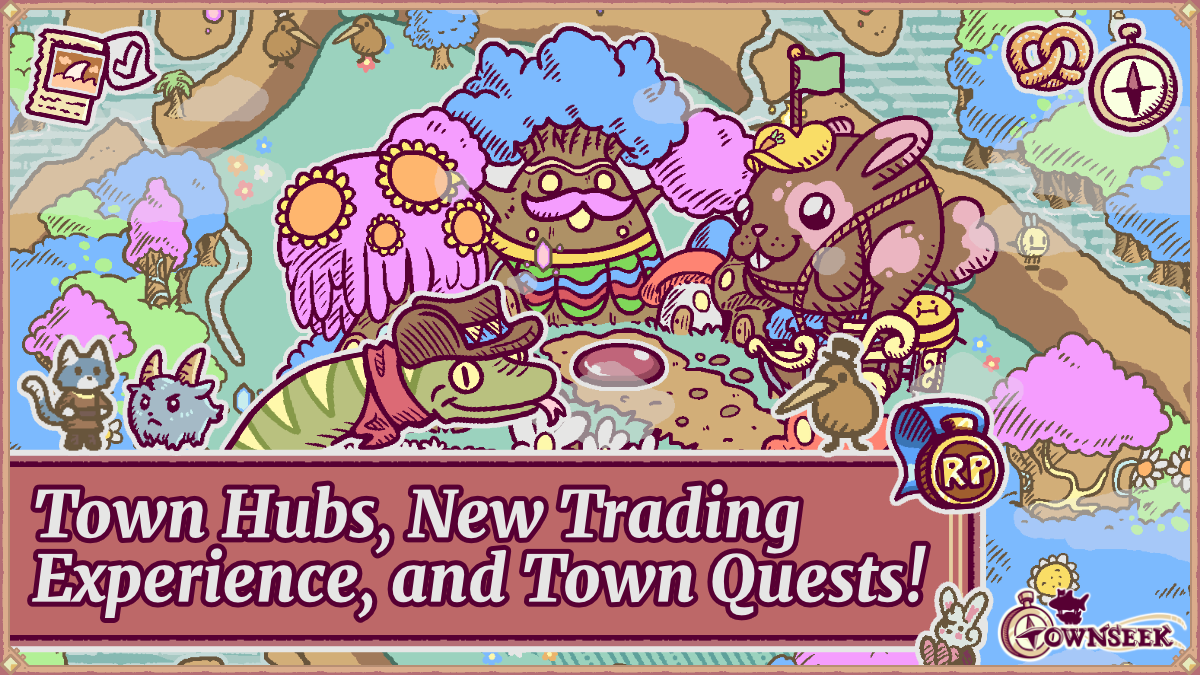 Hey there! 👋 Other than our recent surprise release of Townseek’s Early Demo, you might have realised that we’ve been missing in action with these news posts lately.

Things have been really busy for us these last months! We’ve been working hard on Townseek every day! We’ve been participating in industry events all over the world again, attending conferences like the Game Developers Conference in San Francisco, seeking publishing opportunities and deals for Townseek to push the game further. We’ve received new accolades, like being the golden bat winner at the Big Indie Pitch in London, and participating in a multitude of Steam events!

And of course, there are also major milestones happening with Whales And Games, our studio which recently kicked off its 5th Anniversary celebrations! We’re kicking off our 6th year by becoming an official limited liability company here in Portugal! It not only allows us to dedicate more time to Townseek and our upcoming projects, but also gives us the opportunity to put together many more projects and opportunities that we hope to unveil in the future! 😊 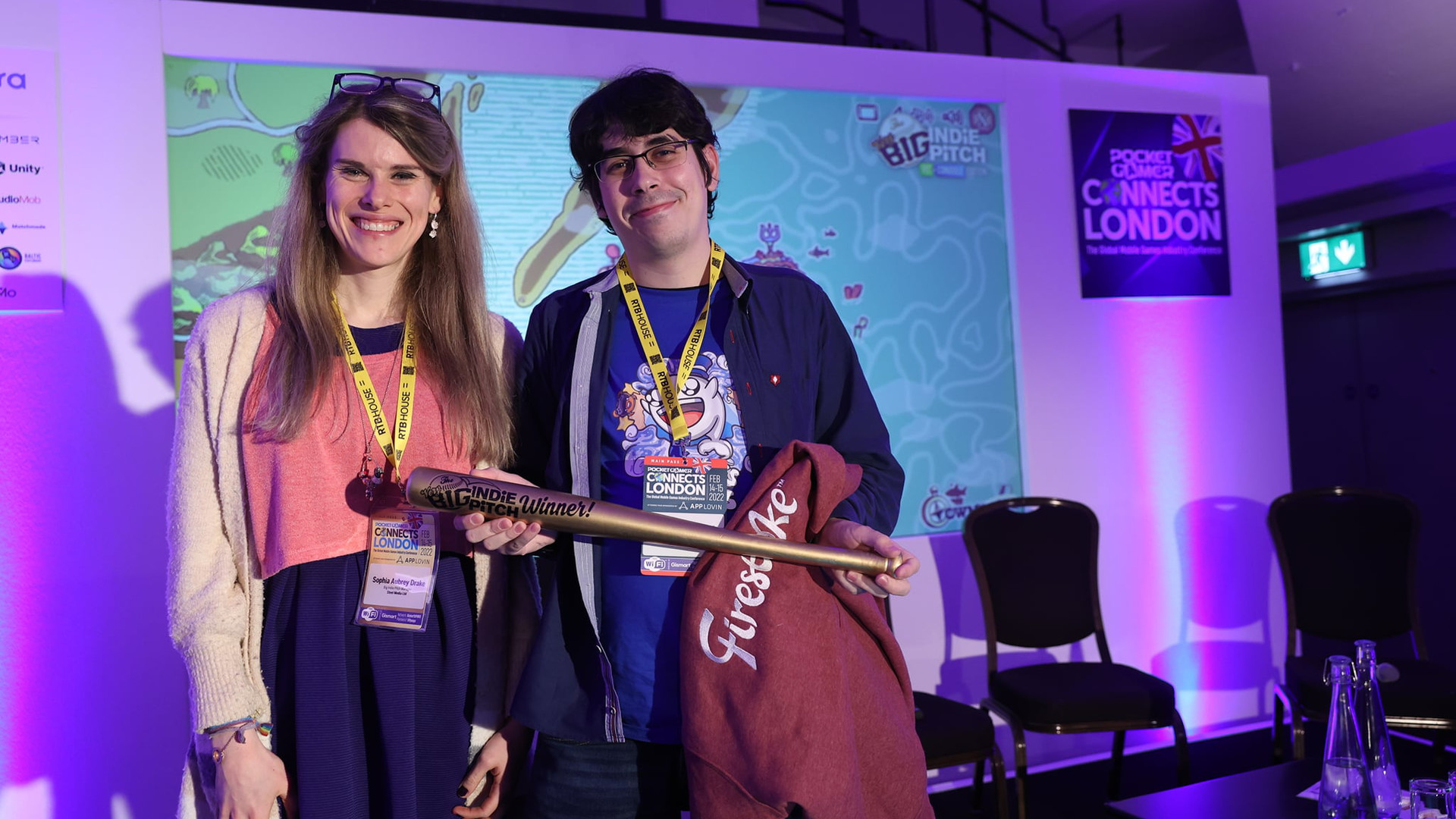 But most importantly, we continue working day-to-day on the game! So, let’s catch up, and get right into some of the latest Townseek news! As announced last month, we are currently running an Early Demo for Townseek through Steam up until the 30th of July! The original date was earlier on the 28th of June, but we have extended it to go alongside our anniversary celebrations and this brand-new status report. If you haven’t tried the early demo yet, this week is your best chance to do so!

Releasing this demo was a sudden decision for us. However, with the recent Dreamhack Beyond andWholesome Direct Steam events, we felt this was the best opportunity for us to gather some feedback at this time. We also wanted to test out the initial impressions of player's of the game! We’re really happy about the feedback that we’ve received so far! There are several tweaks and changes we already want to make in the game according to feedback we've received. 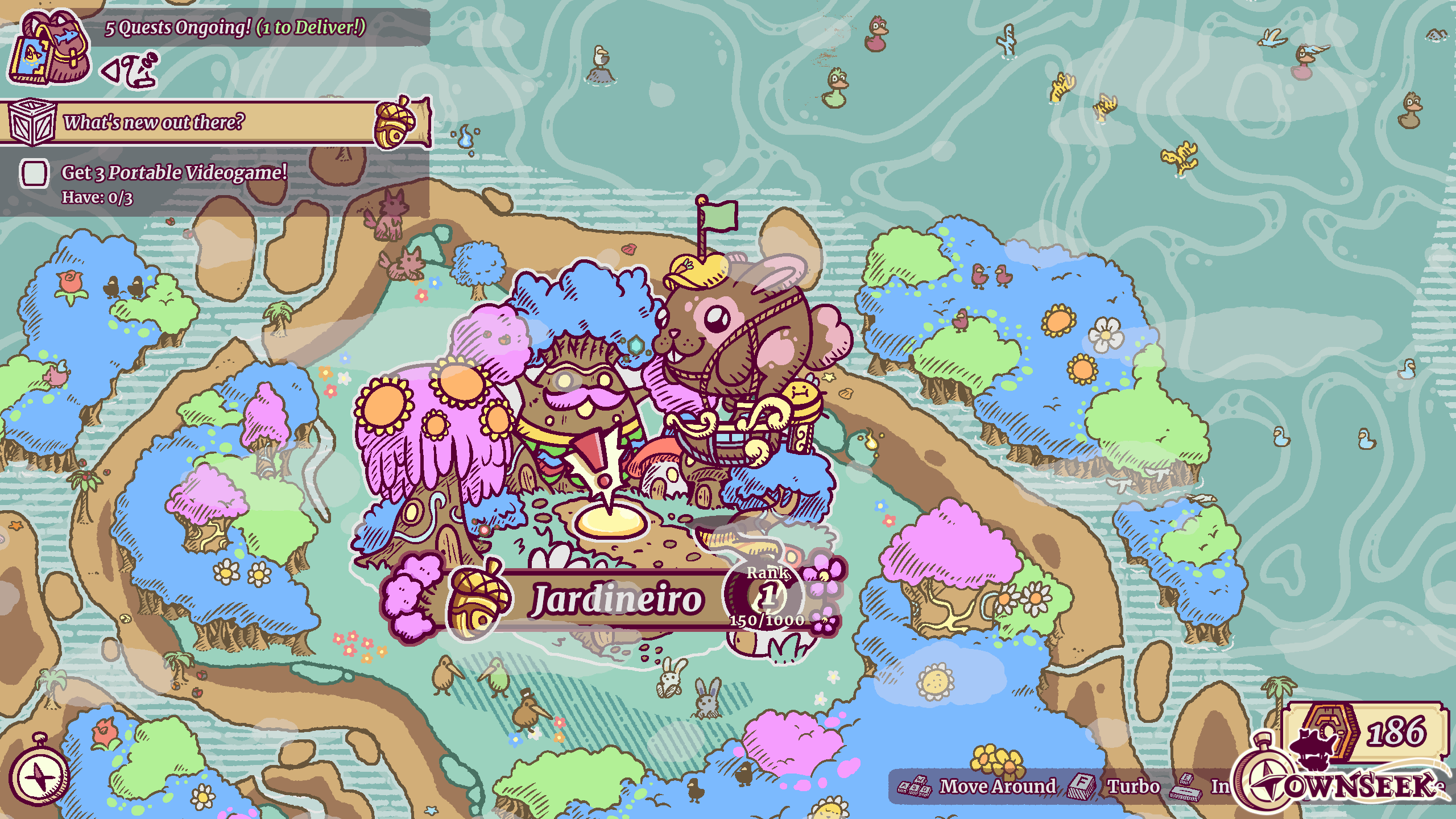 But we’ll be leaving the changes we plan to do with the feedback for a future post, as we first wanted to reflect on the changes we’ve made for Townseek these past months. On the last big update we made on the status of the game back in November of last year, we talked about how one of our goals was to focus more on major game systems. Over the last months, that’s precisely what we did! With those changes, several aspects of the game were greatly revamped since the jam version! ✨

Starting with towns, the town and trading experience in Townseek has been massively overhauled! With towns being the namesake of the game, our goal with the full version is to put much more focus on them. We want to bring unique charisma and attention to all of the different towns around the world. Originally, towns were just stops for trading, without much else to do besides exchanging inventory.

Now, when you visit a town, you’re first presented with a Town Hub, which gives you a small description about the town and introduces you to the town's host. You also get snippets of information about how the town trades, such as currency, categories, and items in demand. This interface also has a lot more charisma, with unique banners, icons and backgrounds for each of the towns. From this hub, you can select one of the three options of things to do there: Trade with Town, Town Quests and Talk with Host. 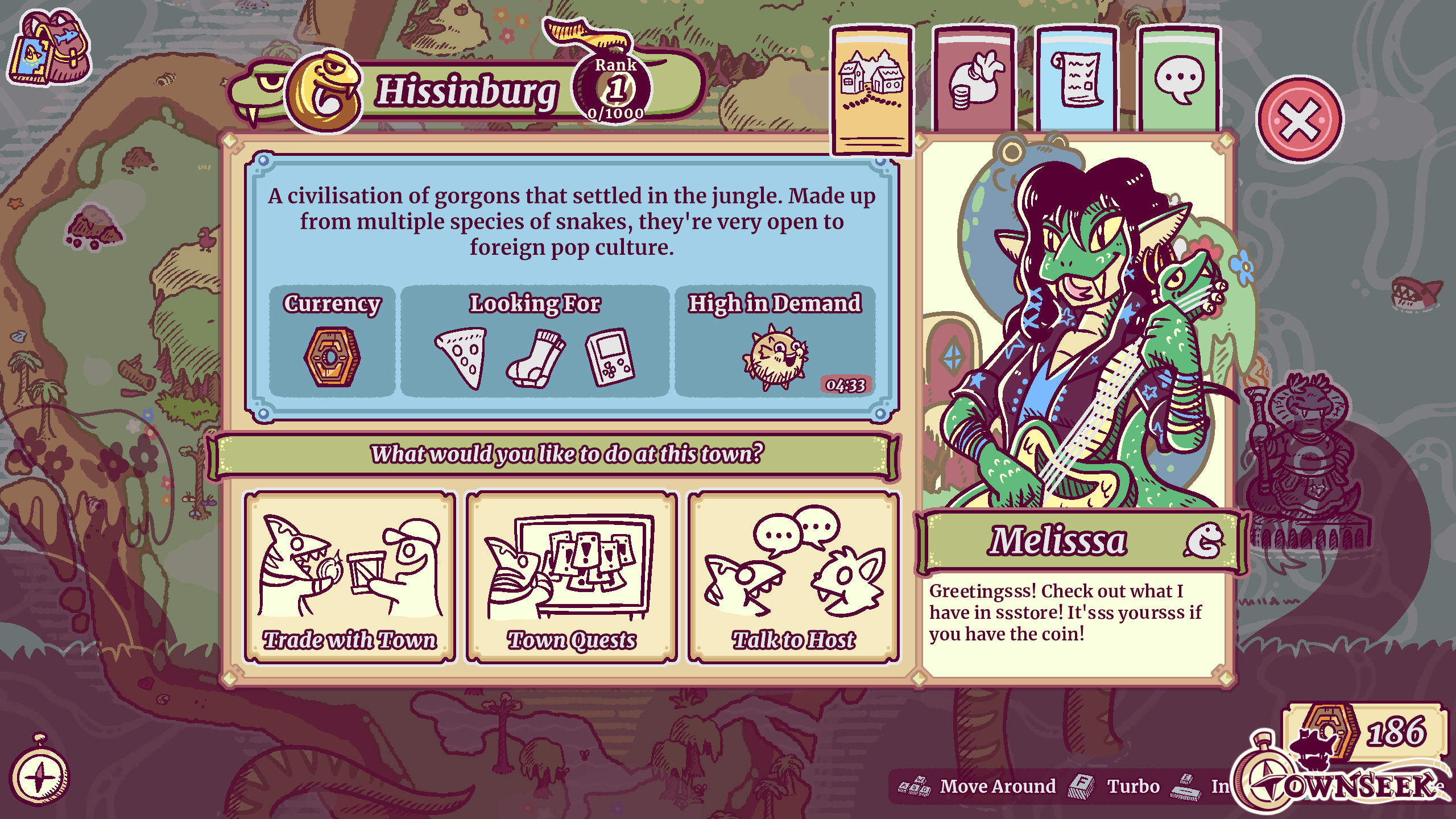 When you select Trade with Town you’re presented your options to exchange merchandise with towns. We’ve changed the way that items are presented into easily readable grids on both your inventory and the towns. Hovering over an item shows new information beyond just their flavour text, such as the item’s category, average price, and the status of the item within the town. 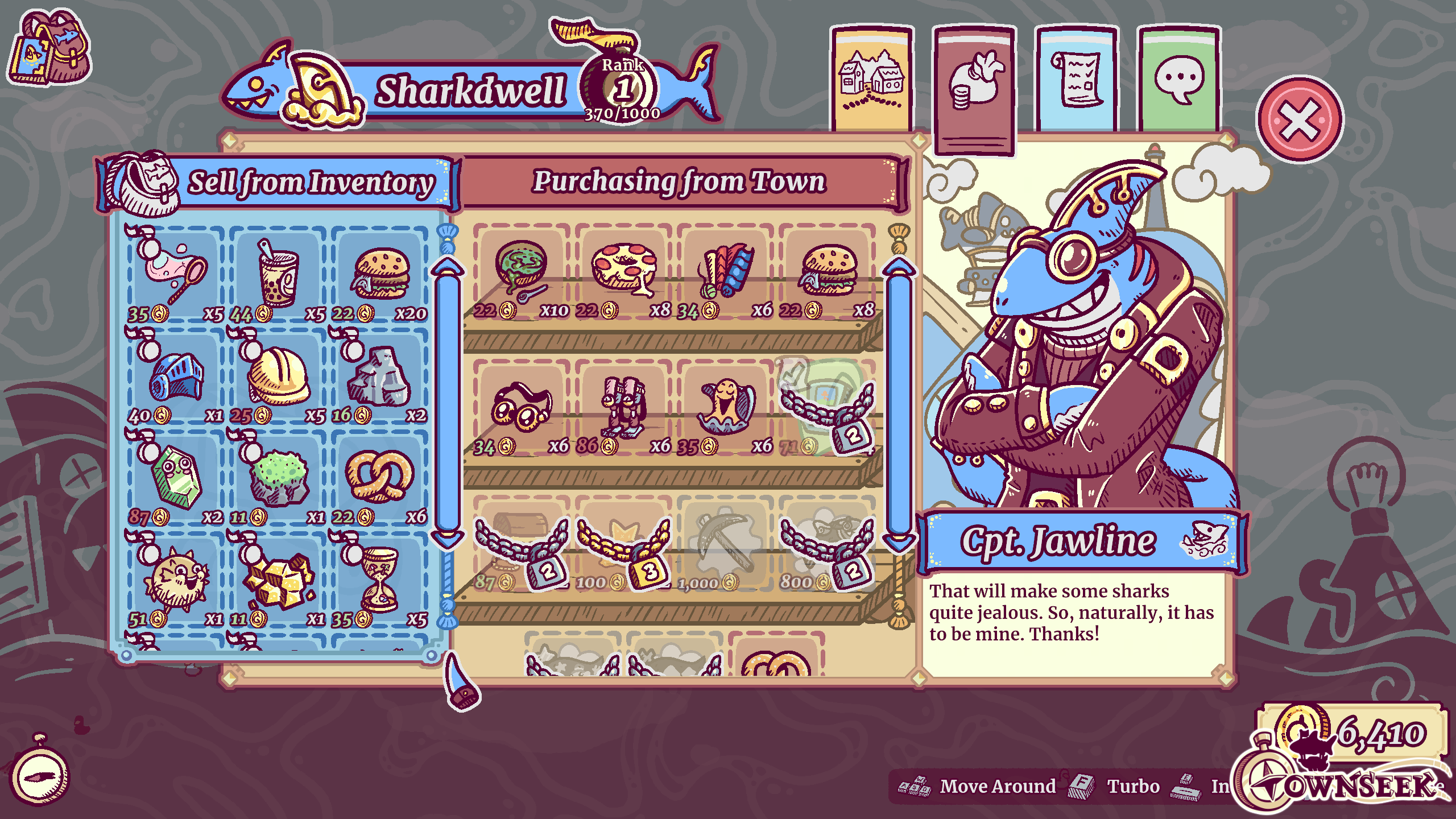 Towns will also sell unique items including Upgrades and Cosmetic Items for your airship. Most of these are, however, locked behind a Town’s Reputation Rank. As you sell new items to a town or complete town quests (more on that next), your reputation with them will increase. After you obtain a certain amount of reputation points (RP), you’ll rank up with that town!

Ranking up unlocks a slew of new items, better category fluctuations, and more. Rank up with towns all over the world to complete your collection and uncover new areas to explore!

Finally, one new additional town trading feature are the Items in Demand! Towns each will have an item in demand that changes from a pool of possibilities every few minutes. These items sell for much higher price than their average value. If you happen to have these in your inventory, they’re a great way for some quick profit! 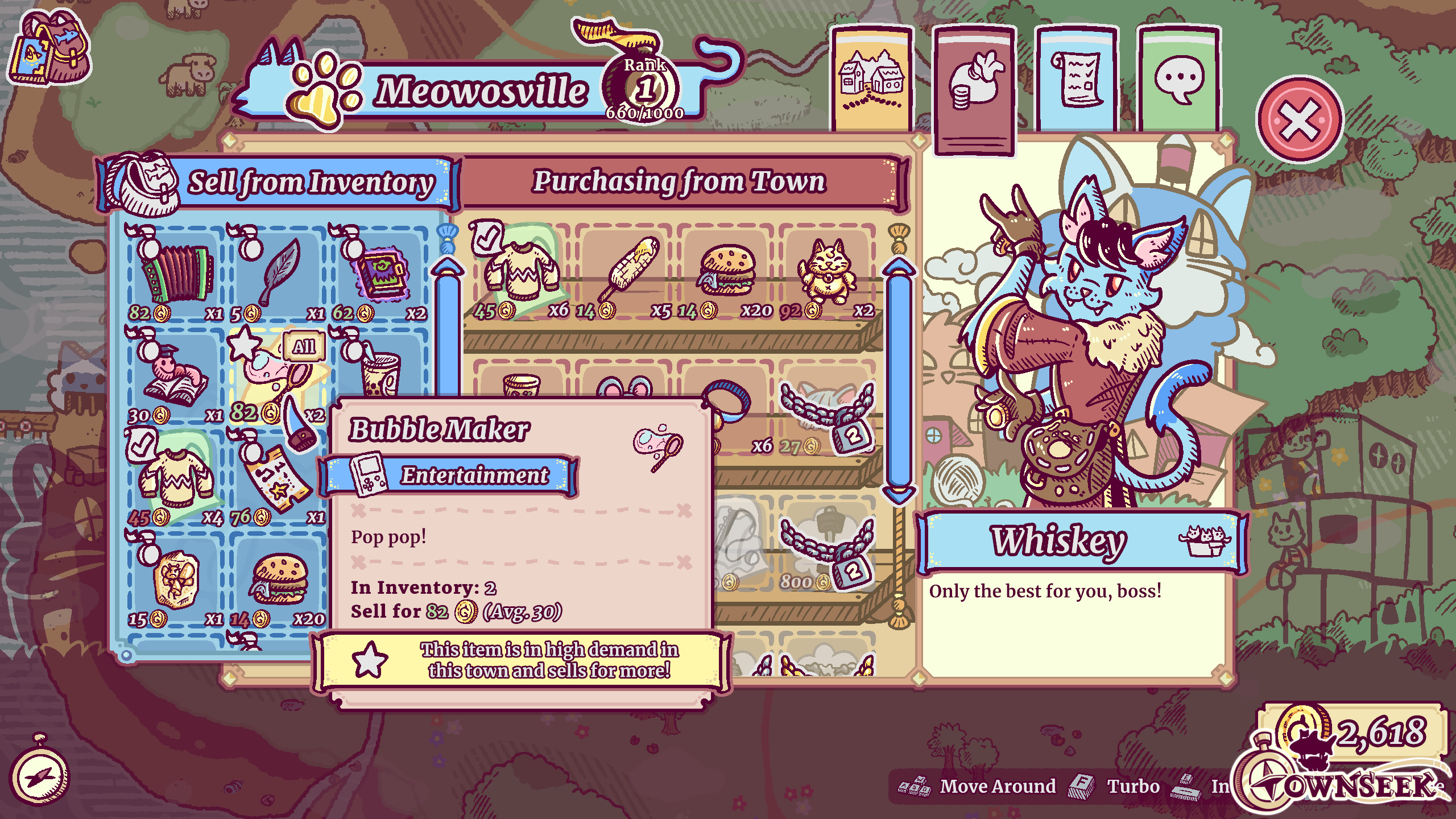 Another big new aspect to towns are Town Quests! Town Quests provide you with various tasks provided to you by each town’s host. Some can include quests asking you to fetch certain items from other towns. You might have to engage in certain activities or deliver tourists from a town to a specific landmark in the world. There's even some unique quests depending on the location.

Completing Town Quests rewards you with a greater amount of currency, reputation points and sometimes even items in a single go. Of course, rewards vary depending on the task, and the quests available rotate regularly. The amount of quests that you can take from a town at a time is limited. As you improve your Town Reputation Rank you'll be able to take more quests at once. With so many towns to explore, you’ll have many quests at your disposal to tackle in the order you want! 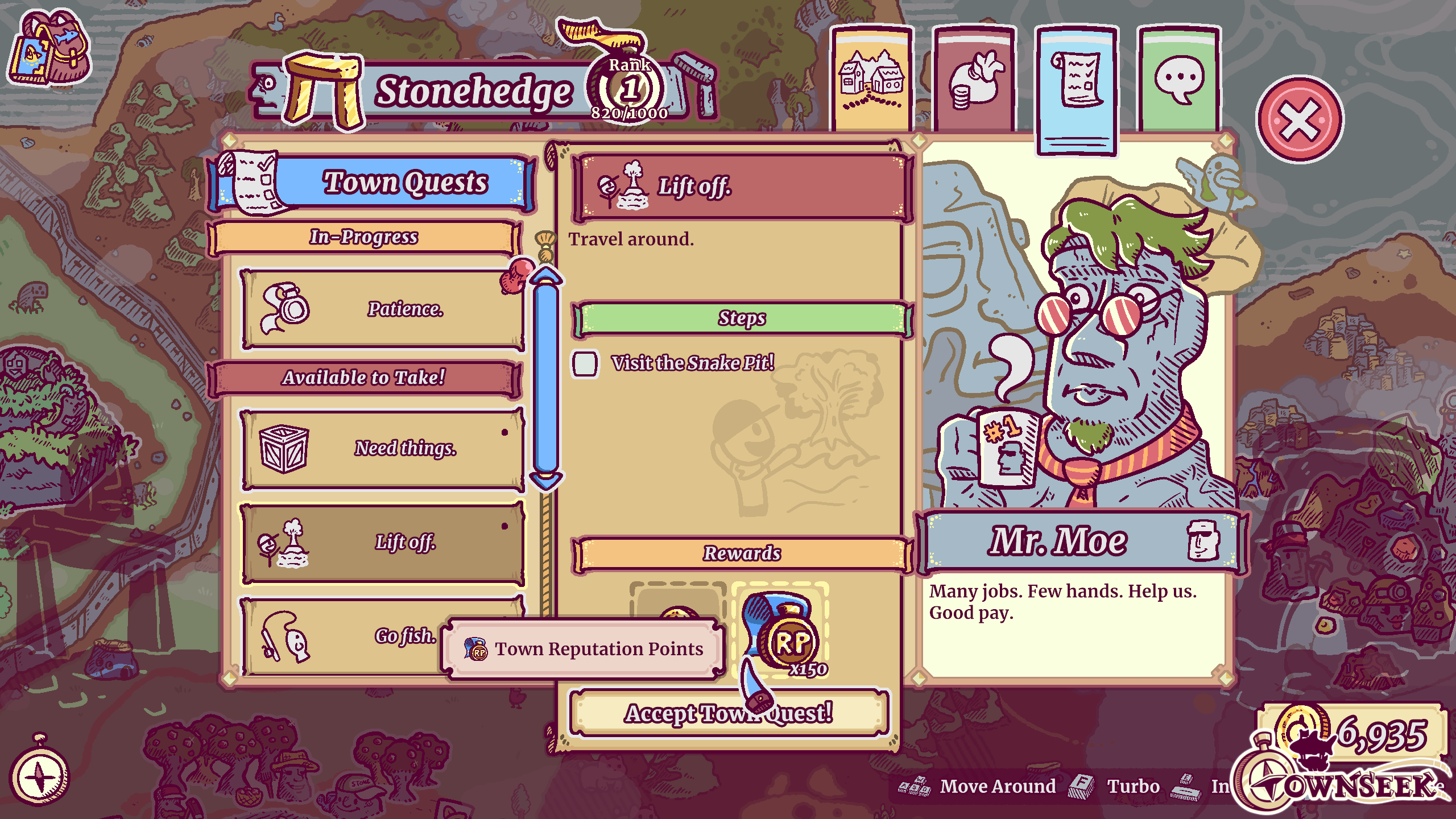 These Town Quests also relate to the Journal of Sir Reginald Sharkingston, as you’ll have to perform various quest branches in order to collect the different pages from all over the different towns. We’ll be going more in-depth about how the game’s story will play out into the game in future reports. For now, simply know that the way pages are collected is built directly on top of these quest systems.

As development progresses, we’ll continue balancing and experimenting with different town mechanics. Our goal is to create interesting and diverse quests. And of course, we're taking into consideration the feedback we’ve received with the early demo. We expect to have made massive improvements by the time that we get to show our game to the public again with a new demo! 💪

Additionally, as we mentioned previously in this post, we’re currently looking into potential publishing opportunities for Townseek. We can’t go in-depth at how conversations are headed at this time, but we believe that the game has some amazing possibilities headed its way! We hope to be able to speak more about them soon! 🤗 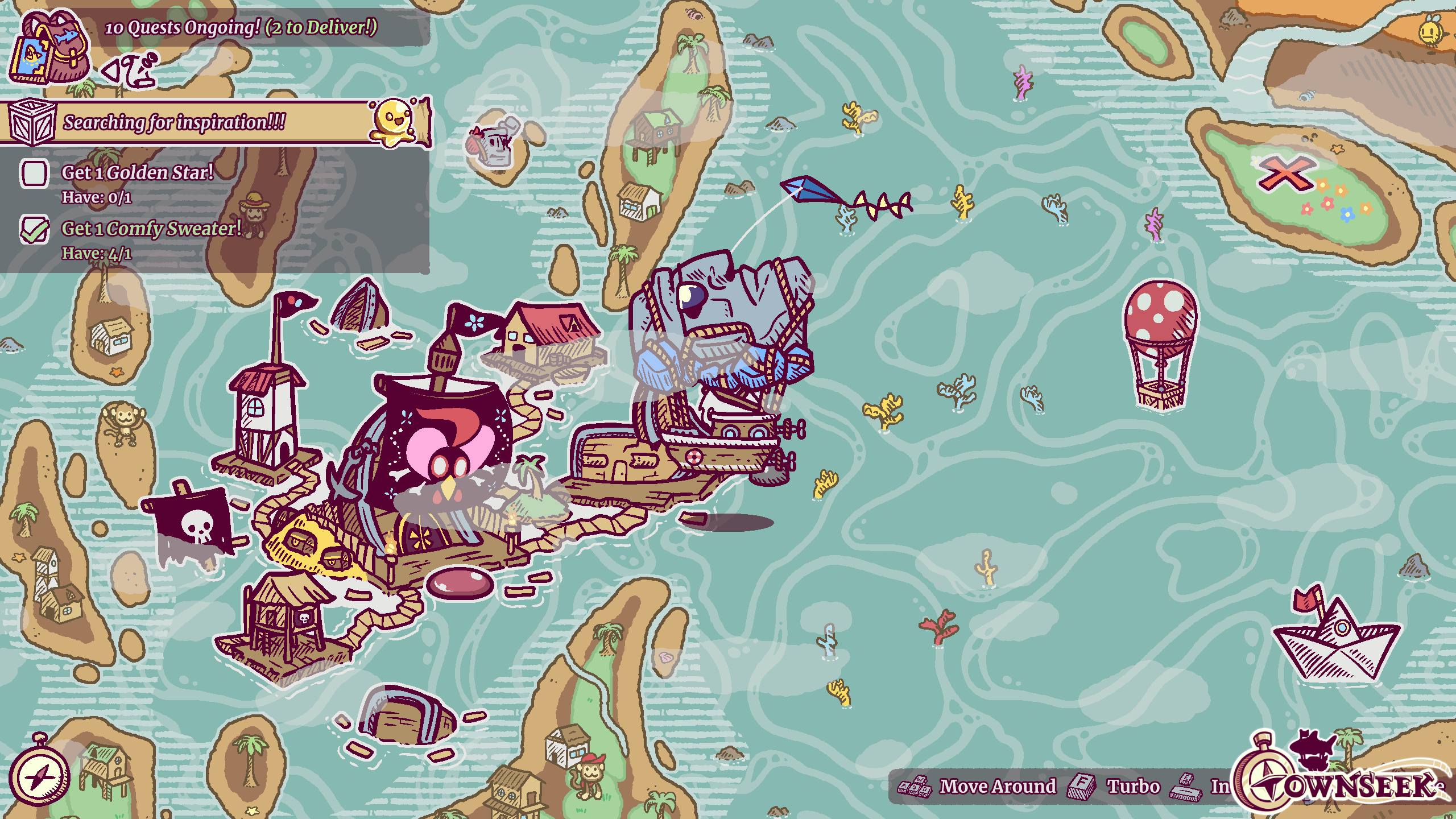 These last years of Whales And Games were very transitional for us as developers, with us figuring out exactly what kinds of games we wanted to make, and trying to find our place in the industry. Gladly, our fifth year and working on Townseek have helped us in all of those regards!

We’re incredibly grateful to be working on a project that means much to us. There are some really great people, even more than you might realise, helping us shape the project the best it can be! Of course, there’s still a lot of work to be done until the game is actually out by next year and many more news will follow as the months go by. We can’t wait to show you some of the stuff we’re cooking in the background! 👍

If you end up taking the Early Demo for a spin, we’d love to know your feedback through our Feedback Thread or by hopping over to our Discord Server! Alternatively, if you prefer more bite-sized updates and sneak peaks rather than these longer news posts, we continue posting progress through both our Twitter and through our Instagram.

Thank you to all of you who have wishlisted and followed Townseek so far, and we can’t wait to show you what’s in store for the future! Cheers! 🐳