Reach the peak of idol stardom! Your rival is sending up her fans to  push you out of the industry. What can you do? Well, punch them so hard they become your fans.

Play as Jazzchan, the idol whose music mesmerizes the masses, and compete against Bluessom in an idol fight of which the world has never heard before! Defend yourself and turn Bluessom’s fans against her with the power of your music (and fists). She’ll do the same, so keep going until one of you goes down. The more fans you have, the worse it’ll be for your rival!

But just don’t beat up each other directly, okay? That’s unprofessional.

While you can jazz-out your opposing fans through the web version here on Itch.io, we recommend downloading the desktop version for the best experience, with higher resolutions and better performance! Be the idol to come out on top!

Love the art style and the character designs, especially Jazz-chan! However, the gameplay itself is lacking the fundamentals of a good beat em up game. Most beat em up games have high hit stun times, which allows you to combo multiple attacks onto an enemy before they hit you back, and it also makes it much easier to take on a whole group of enemies at once. The attacks in this game are also a bit sluggish; attacks in beat em up games usually have very low startup times which makes the gameplay feel much more responsive. I really love the silly concept of this game but unfortunately, the core gameplay leaves much to be desired.

Thank you so much for your comment! 😊 Glad that you like Jazzy's design! She still has a fantastic look that we still love to this day! 🎷

As for your comments regarding the gameplay, thank you for the feedback! It's been a while since we made Jazzy Beats, and at the time, we were still getting started on game jam games and were trying to bite more than we could chew. We definitely agree the gameplay doesn't hold much well nowadays, namely as a result of the time-limit and our experience at the time. 🙏

We've considered a commercial version of the game at some points over the previous years where we wanted to completely overhaul the core combat of the game to be more akin and responsive to a standard beat-em-up, mixed in with some more crazy elements and inspiration from The World Ends With You. Unfortunately, we still thought it was too much for us to handle at once at the time, so we're currently working on other commercial projects. 🙇‍♂️

We do hope that we get to revisit this world, characters and gameplay potential at some point, so thank you again for your comment. Hope to see your around! Cheers! 🐳

Glad that you liked it! 💛 Which of the idols was your favourite? 👀

The unique gameplay method and drawing were impressive.

It's nice, but it feels really unbalanced and unfair. I don't have anyone backing me up, and while I'm trying to convert one fan, two more come after me. I finally figured out how to get large groups to turn at once, but as soon as they reach her, she uses the exact same move and I have to run around avoiding hits until I have enough power to jump into the crowd and flip them all back to yellow. Only for them to immediately turn blue once more. I'm taking damage three times faster than my opponent.

Reply
Whales And Games3 years ago(+2)

Thanks for your feedback! 💙 The game was mostly done as a quick game jam experiment for us to test our grounds in beat-em-ups a few years ago, so unfortunately, when we look at it today, we have to admit it wasn't really the most balanced experience. 😅

It might take some effort, but our recommendation is to try to de-sync the time that Bluessom does her attack compared to you. Her 'area of effect' singing can happen even when before you use yours. Like your ability, she also needs to wait for her cool-down to happen before she can use it again. So when you see that she used her ability, but you still have your  'Ultimate Sax Drop' ability available, you should use that opportunity window to strike back as there will be a moment where she won't be able to convert her fans back.

Also remember that enemies get stunned momentarily when you hit them, so using certain attacks mixed in with each other might create a good rhythm where you can convert fans quickly into your side before they're able to retaliate back. You can actually combo attacks if the skills are available!

Let us know if you were able to defeat her!
Thanks again! Cheers! 🐳

Be nice if the fucking game worked.

Reply
Whales And Games4 years ago(+1)

Sorry you're having issues running the game. Depending on multiple factors like the browser, OS and hardware the game can have some issues loading and running, such as, for example performance problems. Loading problems are one of the most problematic ones, especially with the web versions of our games, given how heavy and long Unity WebGL actually takes to load. That being said, we never really encountered a specific situation where the game would completely fail to load. Sometimes it can take a good chunk of time, but it will eventually work out.

That being said though, since you're reporting that it doesn't work, we would like to ask for more details (if possible) to look into it. First off, we would like to confirm what version of the game you're using. Are you attempting to play one of the desktop versions, or the web version?

Then we would like to request you to try to reload the game once more, and check if there's any result after some minutes (try not to switch the window, as we've seen it sometimes breaks the loading for some reason). If it still don't work, we ask if you could provide us with your current browser (and respective version), OS and RAM memory so we can further do some troubleshooting. If there's any sort of crash dump or error, if we could have more information about it, it'd also help us immensely.

Making sure our games work (and well) is our biggest priority, so we're more than interested in helping out figuring why the game doesn't load. Thank you!

Your game had really a lovely art style (especially the colors of the characters!)  and I appreciate it how non-violent the little battles seemed to be in it. :) I can totally see why Marta liked it so much to write a short article about it. Hopefully some players came to you via our gameplay video as well. <3 Looking forward to your projects in the future!

Reply
Whales And Games4 years ago

Thank you! We are delighted to know that you really liked it, especially the art style! The colors were especially picked to be contrasting but still appealing and defining of the character's personalities.  We also tried to make the battles an ironic occurrence of it's own, trying to mix an overall cheerful theme and music actions with the usual actions you'd see in a typical brawler.

Marta's article was a really motivating read back in December, and we're glad to see more people dedicated to covering game jam games! We hope to surprise you again on future endeavours!

<3 I'm sure you will, you game loving marine creature devs! Looking forward for a new encounter. :) 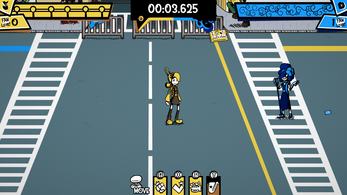 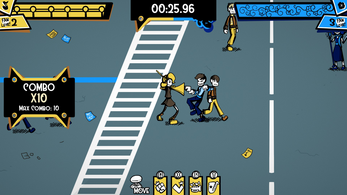 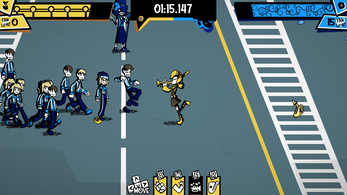 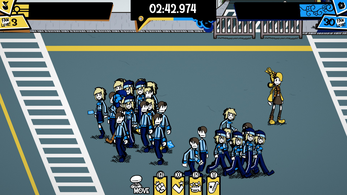 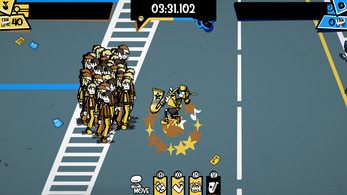